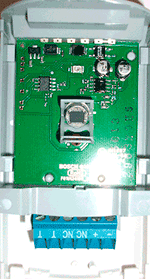 Passive Infrared Detectors or PIR can prevent intrusions by detecting of heat in the environment. There are situations when it can cause false alarms by detecting heat movement. Here are some examples:

·         The heat coming from the dishwasher after it was used can trigger the PIR.

·         The air conditioner can also trigger the PIR by producing cold air out and pushes the hot air across the room.

·         A glass window being heated under direct sunlight, which heats the air inside. If a sudden draft comes in, it can push the air across the room and trigger the PIR.